The first thing I've noticed about this book is a good-quality paper. Crisp white. I guess it's made to last, it shows the will to make this testimonial reach as far as possible. South Vietnamese Soldiers, written by Nathalie Huynh Chau Nguyen, is a collection of memories of war and "after." Yes, after the Vietnam War these people had another fight, another odyssey to endure. We're talking about the most disparaged army in the world, the soldiers who fought for the "puppet" Vietnam regime. The book is about personal stories: many officers, some common soldiers (and some women) in the military, the ARVN (Army of the Republic of Viet Nam), the Navy, and the Air Force. 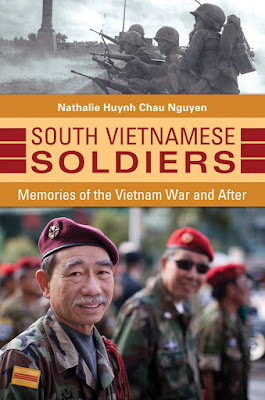 South Vietnamese armed forces did not start very well. During the French colonial period, they were a complement of the French Expeditionary Corps, made of parachutists, the Foreign Legion, colonial troops, and other French volunteer troops. So the Vietnamese National Army was influenced by its colonial masters and some troops were ineffective, many officers more interested in politics than in the fighting. With the exception of a small club of elite units or specialists (pilots, etc.) the soldiers were more interested in being paid than in the war against the communists, and there were training deficiencies. Many of these problems were destined to remain in the new armed forces of the South Vietnamese state, reorganized under USA military and political influence (and money too) after the division of Vietnam into two separate nations following the French defeat. Some of the officers were going to gain notoriety in coups and political struggles more than by military leadership.

Was the new South Vietnamese armed forces' performance any good?

If you read books like A Bright Shining Lie by Neil Sheenan, it doesn't look like it. The book gives us horror stories of violence against the peasant population, theft, corruption, indiscriminate bombing, and a scarce willingness to face real combat. It disparages the South Vietnamese army. But things evolved.

When the USA retreated in 1973, South Vietnam had to fight on its own. It failed, so, apparently, the "puppet" nature of the state and the poor reputation of its armed forces are validated. But is this really the case? I remember reading about several generals and other officers who committed suicide on April 30th, 1975, the day Saigon fell. About the population's feelings, history says in 1954 national elections (following the Geneva Agreements) were avoided by the South leadership because they would have given victory to Ho Chi Minh, the communist leader. But in 1975 we had people fleeing in front of the North's offensive, while the North Vietnamese troops slaughtered them at will. So maybe, at the end of South Vietnam's independent existence, this dying state had at least succeeded in being more appreciated by its population than the communist army and guerrilla.

What is the truth? If you want to know it, probably you'll have to listen to many different versions of the facts, and then make your own opinion. Nathalie Huynh Chau Nguyen gives us a collection of memories and oral histories from the soldiers who fought this long war. They believed their country was going to survive and tried to defend it. When this failed, they had to save themselves. This book is a challenge to the commonly accepted truths about the Vietnam War and a homage to the people who fought on the losing side.

Some of these soldiers were young people, volunteering or forced to leave their studies and go to war just before the final catastrophe. Others fought a very long war, they were forced to flee from the north in 1954 after the end of the French Indochina War, and then suffered the same fate with the "black April," the fall of South Vietnam in 1975. Many were sent to the reeducation camps, the bamboo gulag. Or they had to work in the "New Economic Zones," where they knew hard labor and terrible hunger. After that, they were denied every chance by the communist regime because of their "puppet" status, a sin that extended to their families. No decent jobs, no studies. So they made their escape, some by land, others went through the hazardous sea route to Malaysia or other neighboring countries.

The number of Vietnamese refugees has been estimated at 700,000. Some died at sea, others experienced plunder and rape at the hands of the pirates. Many found a new home in Australia or the USA eventually. The book narrates the generous welcome by the Australians, who gave them recognition as allied fighters and a pension (after some political battles), and the struggle to build a new life. For many of these soldiers, it took two decades to build their fortunes back. Resourceful, resilient, they started a new life, then managed to reaffirm their identity again, to search for lost comrades. Some had escaped, some were still in Vietnam.

Other soldiers' tales are not so lucky. People who were too damaged in body or mind. Lives that are never going to be pulled together again.

This book tells us many personal stories. These testimonials are defiance to the official truth, they tell the story of a country that maybe could have survived, had the USA continued to give military aid (sure the North received it from the communist countries). They speak of a fight long lost, of a memory kept alive in small communities around the world.

Anyway, does anyone care about the Vietnam war, today?