The Raiders of Bloodwood

Descent: Legends of the Dark (published by FFG) is an app-driven board game with miniatures and 3D terrain layouts to create the maps for its fantasy quests. The game world is also the basis of a book series by Aconyte. Davide Mana wrote for this series The Raiders of Bloodwood, a book set in the forests of Terrinoth, a peaceful land attacked by the darkness. 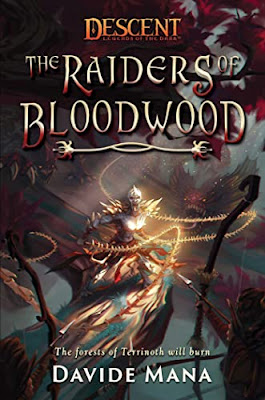 Who are the bad guys? The Uthuk are powerful, grey-skinned beings of (maybe) normal intelligence but driven by violent instinct, blood lust, and pitiless leaders. They are bigger and stronger than most opponents; they wear red loincloths and rags and have a natural carapace armor made of bone plaques and spikes protruding from their bodies. They are aggressive and relentless in their assaults but lack coordination; their tactical skills leave something to be desired.

People are not prepared when this plague falls like a locust swarm on the peaceful lands of Terrinoth. So we see civilians fleeing the horde, protected by a dispirited militia. A small group of people separates from the doomed fugitive columns to follow an elf woman following a different course. They are an old teacher, a shopkeeper with unexpected skills in alchemy and magic, a governess coming from the "catfolk," an orc dispatched by the militia to protect the little group.

Orcs, elves, and dwarves apparently are not rivals or enemies in a Tolkien-like way: they see each other as peaceful people. Elves still keep feeling superior to anyone else and/or mistrusting strangers, though. I had some difficulty visualizing the half-catwoman: from the book's details, it seems she has cat ears and a tail but normal (human) hair and face.

With some misgivings, the elf woman brings the group to her forest in BloodWood. The wonderful forest should be a safe haven.

[SPOILERS from here on out]

But it really is? No.

Our heroes will cross the path of the Uthuk unit guided by Th'Uk Tar, a strong and violent commander feared by his own soldiers, whose task is to attack the elvish forest. The stakes of the upcoming battle are very high. The monsters want to destroy a sacred place.

With skill and competence, Davide Mana uses the background of the world of Terrinoth to create a strong, immersive, classic story. The characters end up at the center of a historical clash of powers, and the reader is in the front row to follow the drama.