The Dice Man against Fight Club 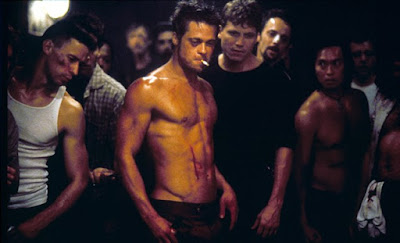 [warning: there are SPOILERS here]

About Fight Club I made a discovery, if a discovery it really it is, by reading The Dice Man (by George Cockcroft). Probably only those who, like me, have read both The Dice Man that Fight Club by Chuck Palahniuk, can relate to this. There is a phrase that struck me in the Dice Man, when the main character, breaking the precautionary obligations which he should follow as a therapist, starts giving strange tasks to his own patients. At one point he tells bullies to provoke a fight with a weaker man, but with orders to lose. That's exactly, the order that Tyler Durden in Fight Club gives his loyalists, when he begins to form his strange army of followers. I've thought about that. Two books, both breaking usual patterns, where every page could be unpredictable... but was it just a similarity?

Palahniuk's main character experiences an existential crisis, he's looking for solutions to end his suffering. These are suggested by another individual, Tyler, that it is none other than himself (in a split personality... both in the movie and in the book this is revealed later, but you can foresee). Tyler Durden's solution (part of) is working on yourself. For example to start a fight with another man, not to win a battle (in fact, there's not a thirst for victory in the book or in the film version) but to recover physicality and instinct feelings. And to give the other men a victory feeling. And, at the same time, to reject the modern, artificial society. So Fight Club is born.

But Luke, main character of The Dice Man, also starts from dissatisfaction. He develops a theory, teaches it to other people, creates educational centers. Just like Durden he creates subversive groups of people to spread his theory about the "dice life"... all obviously with a chaotic concession to random decisions of the die, and not with the cold militaristic efficiency of Tyler Durden.

In both cases, the intention is to hit social conventions hard, and obviously to give a shock to the reader, but while the Cockcroft speech is very broad and touches on a complex terrain (psychoanalysis and philosophy, with excursions also in sociology, politics and religion), Palahniuk deals with just one issue, but a specific one, so he cuts to the chase: the dissatisfaction of the male, male with red blood in his veins and male instincts, in today's world. And the ambitious goal of changing this world. Here of course there is an enemy to be fought directly (big money, power), while in The Dice Man we have an entire society to break up.

With Fight Club the theme is different, and certainly even more effective and closer to the world of today, I give Palahniuk credit for this, but the two books with all their differences proceed on a similar line, which in the case of a work "unusual" as Fight Club greatly reduces the chances of an accidental resemblance. Having noticed these similarities (I googled the topic, I'm not the only one to notice them), I came to the conclusion that the book which started Palahniuk's fame has some debt, not small, not accidental, not on secondary elements, with this forgotten masterpiece of the 70's. Conclusion that I regret a little because I like very much Fight Club, both the book and the film, and now I feel uncomfortable thinking that the stroke of genius came from another work.
Invia tramite emailPostalo sul blogCondividi su TwitterCondividi su FacebookCondividi su Pinterest
Etichette: English posts